d Arthur often discussed things with Thimbletack during his work with the Field Guide, among them an eventual transformation from Boggart to Brownie (which Thimbletack doubted).

When Arthur became prisoner of the Elves in September 1935, his wife Constance died shortly after and his daughter Lucinda ended up in mental

to Arthur's book, but if they answered wrong, they

had to let him go. He told the riddle, whose answer was the moon, and while the Goblins wondered what could be the answer, Thimbletack made a stick hit one of the Goblins. The evil Faerie thought it was one of his companions, the one who was holding Thimbletack, and when he said that it wasn't him, the Brownie used the moment to slip out of the grip, jump in through the mail slot of the door and end up in safety. And at that moment, he felt the anger of Arthur and Lucinda leaving him. He had kept the house perfect and clean for them, and they had just left him. It was in that very moment that Thimbletack became a Boggart.

When Jared, Simon and Mallory Grace moved in to the Mansion together with their mother, Helen, almost 80 years later, Jared started to hear the Brownie moving inside the walls. He told his siblings, and the first night they spended in the house, they discovered Thimbletack's lair: a small hole inside the kitchen wall, filled with peculiar things. They took out many of them and started to wounder which animal who could have done this, when suddenly abrupted by the strange noice in the walls. A few moments later, the children found an old dumbwaiter. Jared climbed into the waiter and Mallory hoisted him up to a secret room in the attic: Arthur Spiderwick's Secret Study, where he find a note from Arthur. Thimbletack tried to scare the Human away by writing the text Click clack, watch your back in the dust on Arthur's desk. Jared became terrified and felt great relief when he came down to the kitchen again.

Thimbletack became angered, and when the children were asleep, he tangled Mallory's hair to her bed end and scratched her arms. Later, after Jared found the Field Guide and tried to reveal the Boggart, Thimbletack went rampaging in the kitchen, froze Simon's tadpoles in ice cubes and took his mice, Jeffrey and Lemondrop. All these events were blamed on Jared.

But when the siblings created a new home for Thimbletack, he transformed from the mean Boggart back to the helpful Brownie he used to be. He returned the mice to Simon and warned the Grace children for how dangerous the book could be.

A few weeks later, when Simon was abducted by a pack of Goblins, Thimbletack showed Jared and Mallory the Seeing Stone that once belonged to Arthur himself. But he did not gave them the stone even when Jared promised to return it, saying that Human children promise a lot but rarely keep the promises. Jared became angered and tried to take the stone by violence, which led to Thimbletack turning back into a Boggart, a shape-shifter this time. Thimbletack fled, which allowed Jared to take the Stone and rescue Simon.

Later, Thimbletack stole the Field Guide from Jared when he didn't see it and replaced it with a cook book called Microwave Magic, because the Faerie believed it to be the best for everyone. Jared tried to make the Boggart forgive him by placing a set of marbles, received from Aunt Lucinda, and a note on the kitchen table. However, this did not help at all, and Thimbletack placed the marbles outside the house, causing the siblings to fall because of them.

After Helen Grace got kidnapped by Mulgarath and his 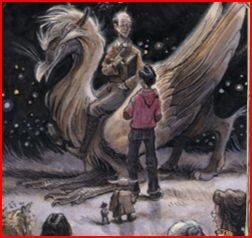 army of Goblins and the Spiderwick Mansion was destroyed, Thimbletack turned back into a Brownie and blamed himself for the chaos around him. He later assisted in catching Hogsqueal, and forced him to reveal the location of Mulgarath. He also followed and helped Jared when he went to talk to the Elves and Arthur Spiderwick. Inside Mulgarath's palace, the Brownie tried to defeat the Ogre by wrapping chains around his legs and around the captured Simon and Mallory, but Mulgarath discovered him and gave him a painful kick. However, the evil Faerie was defeated anyways by Jared and Hogsqueal.

After that, Thimbletack lived in peace with the Grace family at the Mansion.

Like all other creatures of the Invisible World, Thimbletack could become invisible and teleport at will. A somewhat unusual ability was telekinesis: the ability to control objects without touching them. When turning into a Boggart for the second time, he apparently also gained the ability to shape-shift. He is mentioned to first become a rat, then a snake, and then an eel when Jared stole the Seeing Stone from him.

Like all Brownies, Thimbletack was helpful and nice but could be aggressive towards intruders, such as Hogsqueal and the Goblins. When angered, he turned into a Boggart, whose mischieves was mean, cold-blooded and very irritating. Thimbletack always talked in rhyme and riddles, which could irritate others in critical situations, for example when Simon Grace got kidnapped by the Goblins.

Behind the scenes[edit | edit source] 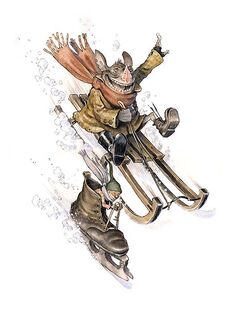 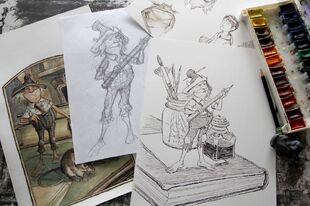 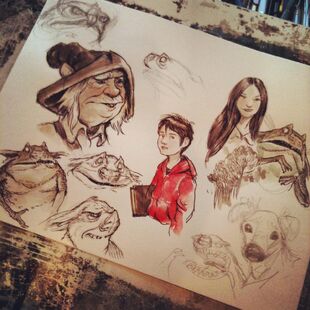 Add a photo to this gallery
Retrieved from "https://spiderwick.fandom.com/wiki/Thimbletack?oldid=9413"
Community content is available under CC-BY-SA unless otherwise noted.