Start a Wiki
This is what's written in Arthur Spiderwick's Field Guide to the Fantastical World Around You about Dwarves.

Dwarves are a diminutive race of faeries who like to live in mountains and deep forests. Since they are primarily subterranean by nature, most avoid bright light (including sunlight), and some are even nocturnal.

Young dwarves have a harsh, stonelike appearance supporting the theory they are carved from rock rather than born. As dwarves become older, their skin becomes finer and more polished, sometimes resembling marble. Dwarves can shift form to become a tree stump or stone, but if you look closely, you may be able to see their features in the wood or rock.

While the elves appear to behave 'like the aristocracy of faerie', idling away their days, dwarves are hard workers with strength far greater than their size. Like elves, however, they value bravery and loyalty and will punish those who ridicule or trick them. Mountain climbers will sometimes find rings or other items along ledges or in shallow caverns. They may also occasionally hear the clanging of these eternal laborers.

Master craftsman, dwarves can forge any metal and make fine weapons that will never lose their sharpness. Because dwarves lead very long lives, the death of another less enduring speices is a continuous source of sadness and many of their creations are an attempt to improve nature.

A whole kingdom of Dwarves lived in Old Quarry not far away from J. Waterhouse School. They were ruled by the Korting, and allied with Mulgarath. They provided his army of Goblins with excellent weapons. The Dwarves were later killed because they planned to rebuild the world in metal and gold, replacing the trees and animals with Ironwoods and mechanical robots. Mulgarath, however, wanted a living world of "flesh, blood and bone".

Arthur Spiderwick once met a Dwarf named Jarlite. It's unknown whether Jarlite belonged to the kingdom mentioned above or not, however it is most likely. 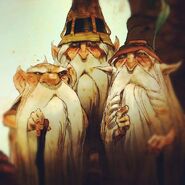 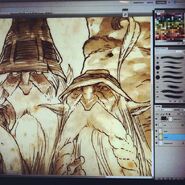 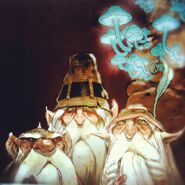 Add a photo to this gallery
Retrieved from "https://spiderwick.fandom.com/wiki/Dwarf?oldid=8302"
Community content is available under CC-BY-SA unless otherwise noted.